The Russian invasion of Ukraine and the associated conflict has resulted in a major exodus from the country as individuals seeking safety attempt to escape the horrors of war. UNHCR, the UN Refugee Agency, has recently estimated that in excess of four million Ukrainians have left their country (with over seven million internally displaced), resulting in an extraordinary crisis with major humanitarian and economic implications. This webinar featured four leading economists discussing the impacts of this ongoing refugee crisis and its implications for Ukraine and the rest of Europe.

This event was co-sponsored by the Georgetown University Global Economic Challenges (GEC) Network, the Einaudi Institute for Economics and Finance (EIEF), the Centre for Economic Policy Research (CEPR), and Solvay Brussels School of Economics and Management (Université Libre de Bruxelles).

Emmanuelle Auriol is a professor at Toulouse School of Economics and the vice president for international relations at the University of Toulouse I Capitole since 2010. Her research interests include industrial organization, regulation, labor, and development economics. She is the author of the award-winning book Pour en finir avec les Mafias (2016), as well as the co-author of the book Regulating Public Services: Bridging the Gap between Theory and Practice (2021). Auriol is a fellow of the Institut Universitaire de France (IUF), European Environment Agency (EEA), Center for Economic Policy Research (CEPR), European Development Research Network (EUDN), Center for Economic Studies, and Ifo Institute (CESifo); she chaired the EEA Standing Committee on Women in Economics (WinE) from 2015 to 2018. She is also a member of the Conseil d’Analyse Economique, the French prime minister’s advisory council, and a member of the administrative council of the French Office for Immigration and Integration (OFII).

Tito Boeri is a professor of economics at Bocconi University. He has been centennial professor at London School of Economics, senior economist at the Organisation for Economic Co-operation and Development (OECD), and a consultant to the International Monetary Fund, World Bank, European Commission, International Labour Organization, and the Italian government. Boeri has also served as president of the Italian Social Security administration (INPS). He has been director of the Rodolfo Debenedetti Foundation since its establishment in 1998. He is a fellow of the European Economic Association and the European Association of Labour Economists. He is a columnist for La Repubblica, a founder of the economic information website Lavoce, and of the English-language website Vox EU. He is the scientific director of the International Festival of Economics in Torino.

Christian Dustmann is a professor of economics at University College London (UCL) and the founding director of the Centre for Research and Analysis of Migration (CReAM). He was the president of the Asian and Australasian Society of Labour Economics (AASLE) from 2017 to 2021, which he helped found. He has also been president of the European Association of Labour Economists (EALE) and the European Society for Population Economics (ESPE). Dustmann is an elected fellow of the British Academy (FBA), the German National Academy of Sciences (Leopoldina), the Academy of Europe (Academia Europaea), the Econometric Society, and the Society of Labor Economists (SOLE). In 2020 he was awarded the 2020 Carl-Friedrich-von-Weizsäcker-Prize by the German National Academy of Sciences. He has held visiting professor positions at Harvard University, Princeton University, Stanford University, Yale University, and the University of California, Berkeley. He was ranked #1 in the 2019 Handelsblatt economists ranking among research-intensive economists from German-speaking countries and German-speaking economists abroad.

Anna Maria Mayda (moderator) is a professor of economics at Georgetown University, with a joint appointment in the Economics Department and School of Foreign Service. Before graduate school, she worked at the World Bank in the Latin America and Caribbean Region Unit. She received a M.A. and Ph.D. in economics at Harvard University, where she was also a doctoral fellow at the Center for International Development. She has been a visiting scholar at the Trade Unit of the International Monetary Fund Research Department, University of Milan, Einaudi Institute for Economics and Finance in Rome, and Centre d’Etudes Prospectives et d’Informations Internationales in Paris. More recently she was senior economist and senior adviser in the Office of the Chief Economist at the U.S. State Department in the Obama administration. She is a research affiliate at the Center for Economic and Policy Research, the Institute of Labor Economics, and the Centre for Research and Analysis of Migration. 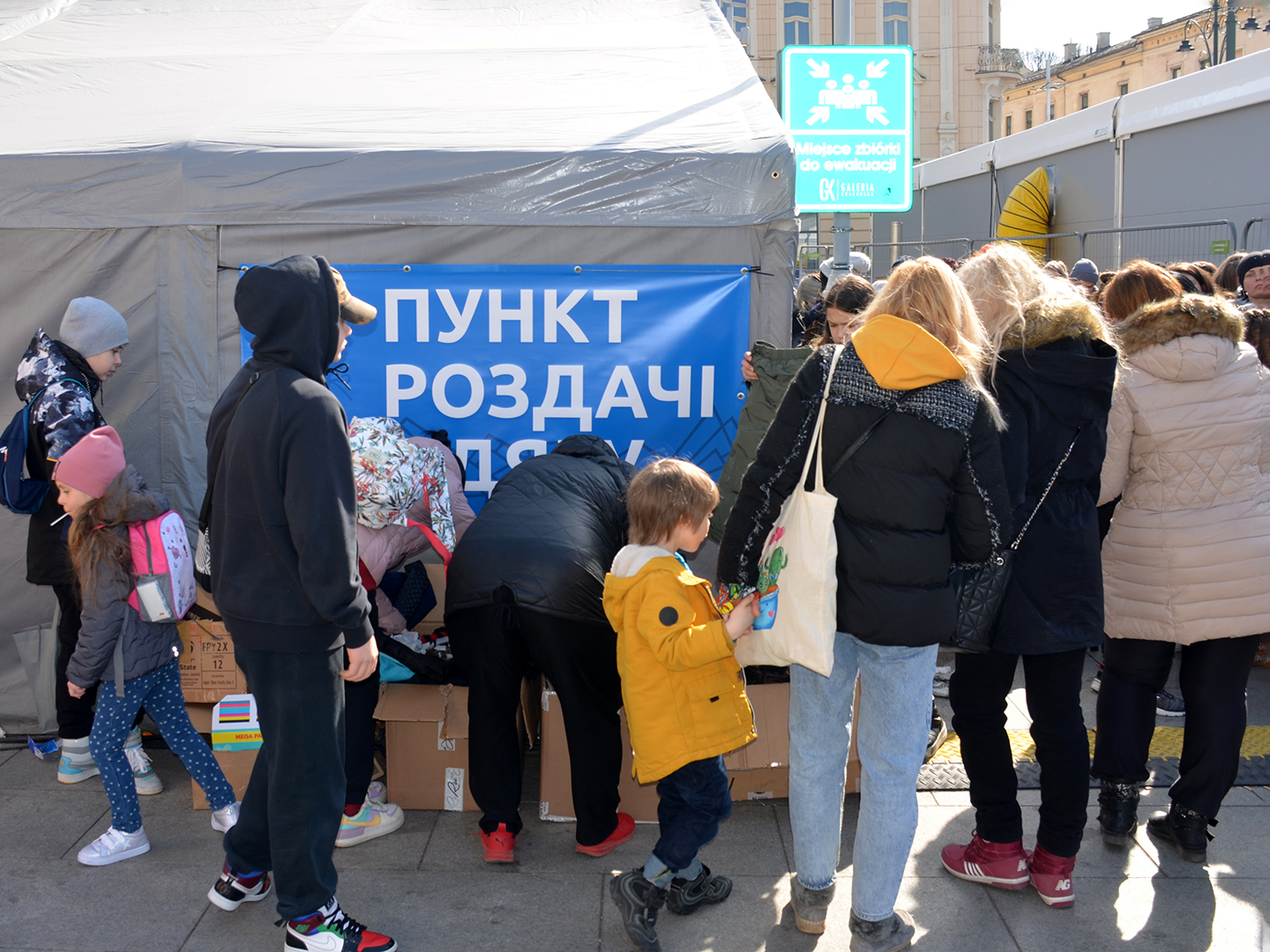 Ukrainian refugees waiting in line for food in Poland

RSVP to The Ukrainian Refugee Crisis