BLOG: Lessons from Our Class

On November 15, the Gender+ Justice Initiative and the Theater & Performance Studies Program hosted a pre-show discussion for the play Our Class. The topic was “What Could I Do? Questions for Today from the Play Our Class.”

Playwright Tadeusz Słobodzianek wrote Our Class in Polish, and it was first performed in 2008. The story focuses on ten classmates, five Jewish and five Catholic, who grew up in Poland. The main act of violence in the play situates around the Jedwabne massacre of July 10, 1941.

The play was inspired by Jan T. Gross’s book Neighbors (2001), which debunked the assumption that the Nazis solely instigated the pogrom and described the mass-murder as largely carried out by Catholic neighbors who later moved into the Jewish homes and businesses. The play focuses on the range of antisemitic prejudices that caused interpersonal homicidal and sexual violence.

The talk featured Dionne Smith Coker-Appiah, Ph.D., MAED, an associate professor in the Department of Psychiatry at Georgetown University School of Medicine. She was joined by Mariana Nozela Prado (MSFS‘19), a master's candidate in conflict resolution who works as a student facilitator in bystander training. Lastly, they were joined by Julia Tvardovskaya (MSFS‘20), the assistant choreographer and a master’s candidate in the School of Foreign Service.

Coker-Appiah said that one of the key methods to countering adolescent dating violence is to deal with misogyny at an early age and teach young men not to be complicit bystanders when they see casual microaggressions against women. This line of thinking connects with the major theme of the play of the growing antisemitism amongst the classmates. The path to murdering your Jewish classmates starts with antisemitic children songs.

Moreover, Prado brought up in her bystander training that students in a survey were asked to locate specific acts of violence (both sexual and nonsexual) on an x and y-axis graph comparing frequency of violent acts compared to how immoral those acts were. Students rated violent acts that happen more frequently to be not as bad violent acts that happen infrequently. This speaks to the trend that normalizing smaller aggressions allows for the acts of violence that we deem unspeakable and unforgivable.

The question of normalizing violence was also brought up by Tvardovskaya, who spoke on the toll that acting out these scenes can have on cast members. She said that while staging murder and sexual assault brings up the concern of perpetuating violence, the cast of Our Class worked hard on not desensitizing the brutal acts but using these stylized forms of violence to allow emotional connections to be made by the audience. The members of the cast were also given resources to prevent a toll on both the actors perpetrating and receiving violent acts.

Neither the pre-show discussion nor Our Class can provide an answer on how to respond when you see an act of genocide happening before your eyes. However, both the discussion and the play illustrated how bystander intervention to small antisemitic or misogynistic acts when your personal safety is not in danger can help prevent future harm.

This post was prepared by Katie O'Hara (G'19) as part of the HoyasForShe Student Fellowship. 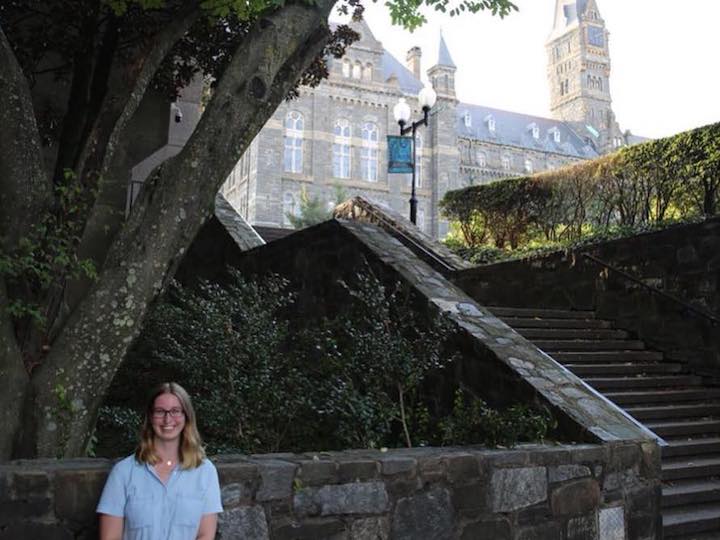