Are sensory experiences connected to emotions? Are senses themselves interconnected? Georgetown Professor Kathryn de Luna has dedicated her research to answering these questions in the context of premodern central Africa, presenting her newest research in Sweden this past June.

De Luna is a cultural historian and an associate professor in the Department of History. She studies a time period and region that has left few written documents for historians to examine, yet her unique, interdisciplinary methodology has yielded profound findings about perception and emotion that are still relevant today.

After receiving an International Travel Grant from the Office of the Vice President of Global Engagement, de Luna traveled to Umeå, Sweden, to present her cutting-edge research on the relationship between sensory experiences and emotions across several millennia in central Africa at the International Society for Cultural History’s conference for “Senses, Emotions, and the Affective Turn.”

METHODS FOR STUDYING AN UNDOCUMENTED PAST

“Like most of human history, for periods before the nineteenth century, central Africa lacks the traditional archives of cultural history inquiry,” de Luna explains in her abstract. “I study periods with no documents (oral societies) and few recoverable plastic arts. How can we study senses, emotions, and affects in such undocumented pasts?” In the absence of archival documentation, de Luna has primarily used a methodology called historical linguistics to produce her findings.

“I produce historical data about people living in ancient Africa by reconstructing the words that were used in earlier periods of time,” she says. “I use linguistic data primarily collected from fieldwork, but supplemented by material in the scant published dictionaries and ethnographies associated with hundreds of communities speaking Bantu languages published since the nineteenth century.”

Historical linguistics is not de Luna’s only method. Engaging with the history of technology, examining the history of senses in other regions, as well as exploring archeological evidence has helped her build a more comprehensive narrative of emotions and senses in central Africa.

Professor de Luna is a recent recipient of a prestigious Mellon New Directions Fellowship, which will allow her to spend three years training in the scientific study of ancient pyrotechnologies in labs around the world, including a year at Yale. She seeks to gain a deeper understanding of the archaeological aspect of the history of emotions and senses. “I am incredibly excited to explore these new methods and learn how material science and engineering illuminates materials recovered through archaeology. This will definitely lead to some new data,” says de Luna.

A DIFFERENT PERSPECTIVE ON THE SENSES ​

At the conference, de Luna’s presentation revealed that Western sensory distinctions between sound and sight may not be as absolute in other cultures, in part because of links between senses and emotions as modes of cognition.

Studying the roots of words that referred to shiny objects’ physical properties in early Bantu speech communities, de Luna found that one such root also referred to the clanging of bells. Thus, different roots of one word referred simultaneously to visual and aural senses—those of shining and clanging.

According to de Luna, “Premodern central African history suggests that not only can we distinguish more than five senses, but that sensory distinctions can collapse and blur, which tells us we need to pay much more attention to the history of synesthesia.”

Through such research, Professor de Luna opens up the possibility that premodern central African linguistic history may allow a glimpse into different ways of conceptualizing sensory experiences and emotions, and offer a chance to investigate radically different worldviews from Western ones.

The International Society for Cultural History’s conference on “Senses, Emotions, and Affective Turn” brought together scholars from many interrelated areas of study, including history, archeology, classics, art history, and literature.

The majority of research was focused on the early modern and modern period in Europe. “There were scholars studying all parts of the world—Europe, North America, Asia—but premodern Africa was definitely underrepresented,” observed de Luna.

“Presenting the unconventional paper is always kind of funny because the audience is either silent, or you get a ton of questions,” de Luna noted about her experience at the conference. “This time, it was the latter, people were really interested in my research.”

De Luna found the conference to be illuminating in its attempt to present a comprehensive picture of the history of emotions and senses through assembling a truly interdisciplinary group of scholars.

The conference revealed the “historical links between emotions and senses,” which can help us answer modern questions about sensation and perception, phenomena like synesthesia, and cultural experience.

“This is what’s so rewarding about working in history,” remarked de Luna. “Everything is ultimately connected to seeing something new in the here and now.” 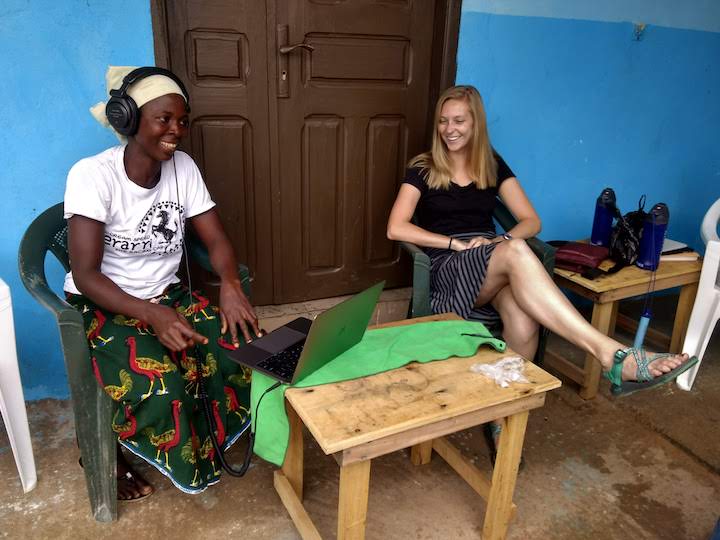 Assistant professor of linguistics Hannah Sande is working with Mouton Grammar Library and students to publish the first official grammar of Guébie.