Cameron’s remarks focused on priorities and prospects for the global health security agenda, as well the importance of biosecurity and technology’s relationship with biological risk.

“Disease threats know no borders. It doesn’t matter if they’re naturally occurring, if they’re deliberate, or if they’re accidental,” she remarked. “They can potentially kill thousands of people, cost billions, and lead to political collapse.”

Cameron’s presentation was the first event in the GHSS and GHI Global Health Security Seminar Series, which aims to address critical issues in global health and promote greater dialogue on pandemic preparedness.

The Global Health Security Agenda (GHSA) is a multisectoral and multilateral partnership that was launched in February 2014 by a group of nations, international organizations, and non-governmental stakeholders seeking to improve prevention, detection, and response to infectious diseases.

Cameron, a former senior director for global health security and biodefense on the White House National Security Council staff, highlighted how the Ebola outbreak, as well as the establishment of measurable targets, elevated this agenda on the global stage.

She added that agreeing on metrics that evaluated the effectiveness of interventions helped build stakeholder buy-in. “Being able to say how we were going to address this very concretely—and that we had at the time more than 50 countries interested—that was the most important factor.”

Despite improved international consensus on global health security, Cameron noted the paradox that new technology presents when implementing the agenda.

“Technology and innovation are vital to be able to fight pandemics, but at the same time you don’t want to see one caused because of misuse,” she said. “It’s this conundrum that makes this a tough conversation, but a worthy conversation.”

Cameron also warned against the under-representation of biosecurity in the GHSA, pointing to small biosecurity budgets and insufficient risk assessment and mitigation strategies. She also raised broader questions regarding how global health security norms are established and by whom biosecurity should be governed internationally. Still, she sees opportunity.

“I do think that we are in a period of time right now where there is a lot of interest in building the bioeconomy,” she shared. “I think we have an opportunity to build into the bioeconomy really great best practices in biosecurity and biosafety. And I really worry that if we don’t do it, time will pass us by, and we will have missed a huge opportunity.”

Like Cameron, the university recognizes these challenges and opportunities in the fields of global health and security. Friday’s event was the first in a series of seminars that will be hosted by GHSS and GHI during the 2017-2018 academic year, and it is part of a broader Georgetown initiative to bolster global health efforts.

The GHSS, launched by the Medical Center in 2016, builds the evidence base and capacity to prevent, detect, and respond to public health emergencies. The GHI, a joint venture of the Medical Center and the Office of the Vice President of Global Engagement, is a university-wide platform that supports global health research, teaching, and service.

Rebecca Katz, co-director of GHSS, views the Global Health Security Seminar Series as a way to engage university community members on these issues.

“We see this seminar as an important opportunity to bring the Georgetown community together with the professional community in Washington, D.C., to explore important issues in health security,” she said. “We are excited to hear about cutting-edge issues and pressing concerns in global health security from experts in the field.”

A full video of Cameron's seminar is available online. 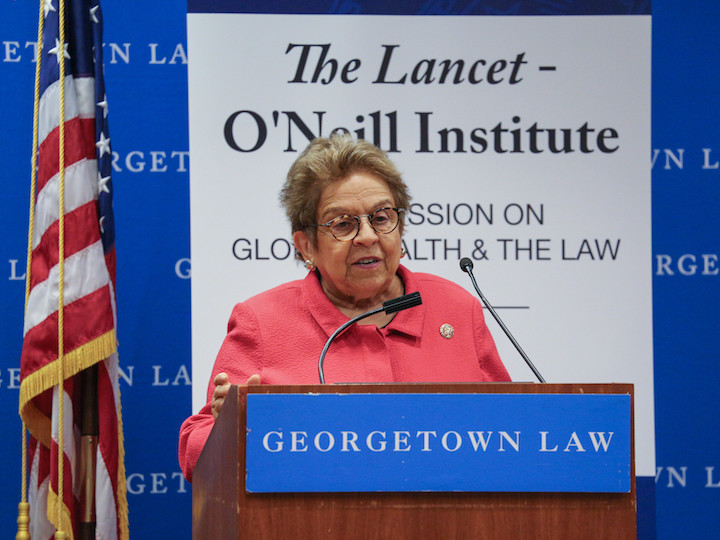 How law can be used to advance global health care rights is the subject of a study released by a recently created commission comprising Georgetown Law's O’Neill Institute for National and Global Health Law, and The Lancet journals.