Empowering Women and Youth Through Storytelling: 2016 and 2017 Projects for Peace

“My challenge to you is to bring about a mind-set of preparing for peace, instead of preparing for war.” Under this mandate, philanthropist Kathryn W. Davis established the initiative 100 Projects for Peace, which awards students $10,000 toward a grassroots project of their own design intended to promote peace.

Each year since its founding in 2007, students from among the Davis United World College Scholar Program partner schools are selected to carry out their proposed projects. The program, which is coordinated at Georgetown by the Center for Social Justice Research, Teaching and Service (CSJ), has allowed Georgetown students to engage with affected communities on issues that range from environmental education to improving respiratory health.

The most recent awardees in 2016 and 2017 hoped to promote peace in very different places. From the India/Pakistan border to Southeast D.C., both projects leveraged artistic programming to encourage storytelling and community-building among vulnerable populations.

In the summer of 2016, Devika Ranjan’s (SFS’17) project took her to a small village in India near the border with Pakistan. In Manguchak, rates of poverty and drug abuse are high, and violence along the border is commonplace.

Ranjan’s project sought to develop a greater sense of community among village women by using techniques from the Theatre of the Oppressed and the Theatre of the Living, which aim to promote social change and cooperative expression.

Ranjan led three weeks of workshops in which 24 women gathered to discuss village problems, identify commonalities, and incorporate them into a play. “Women's voices are generally unheard in patriarchal societies like rural India. When they gathered, it was clear that they had strong goals as well as the energy to tackle problems in their village,” said Ranjan.

Ranjan’s work was not without obstacles. Community members were suspicious of her intentions, so much so that after two weeks of workshops, Ranjan discovered a police report had been filed against her.

“I explained to a gathering of village men that I was simply trying to learn about the problems of rural women and using games as a way for them to relax and get to know me as an outsider. Although there was still some concern, the men seemed satisfied by this explanation and the attendance numbers of the workshop remained constant.”

The women’s final production was attended by the district magistrate. Impressed by their performance, she approved their requests for a new water hand pump; additional police forces to monitor drug abuse and domestic violence; and emergency transport and shelter in the event of cross-border bombings.

Now, the women meet every Sunday to discuss plans for the village’s future.

HELPING YOUTH NEAR THE HILLTOP

“We chose Washington, D.C. in large part because so many people think of ‘peacebuilding’ as something that happens far away. We wanted to bring attention to the stories of the young adults who live in the same city as us, but who live such different lives.”

Forger and Dickinson believe the arts play a critical role in sewing the seeds of peace. “Art is a powerful tool to create a sense of community. Peacebuilding is contingent on the realization that, as humans, we all have some degree of shared feelings, thoughts, and experiences. Furthermore, the art provides a method of self-expression. This self-expression contributes to an increased sense of belonging, so as to create a feeling of adding value to the community,” they said.

Forger and Dickinson first began working with D.C. youth through CSJ’s After School Kids (ASK) Program, which celebrates its thirtieth anniversary in 2017. By combining ASK students’ ideas with project resources, the program strives to be community-driven.

“The project was really born out of our students coming to us with the idea of starting a mentorship and arts program in their community. Over the last three years, we have developed a deep love and appreciation for the talent present in the D.C. neighborhoods that is so often hidden from the mainstream. We were happy to make this idea of a mentorship and arts program a reality.”

To learn more about Projects for Peace and the Summer 2018 application cycle, visit https://csj.georgetown.edu/100projectsforpeace. 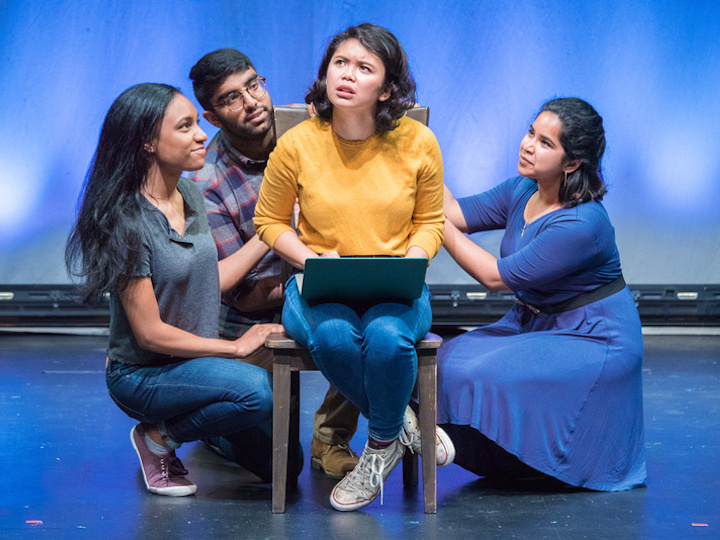 CrossCurrents is a citywide biennial festival that highlights innovative artists—Georgetown students and alumni among them—who are harnessing the power of performance to humanize global politics.