Office of the President

Executive Director of UN Women Phumzile Mlambo-Ngcuka visited Georgetown University on February 24 to commend Georgetown’s participation as a university impact champion in the #HeForShe initiative. Mlambo-Ngcuka applauded Georgetown’s efforts to identify, research, and combat causes of violence against women and gender inequities both on and off campus.

In his introduction, Georgetown President John DeGioia shared updates on Georgetown’s landmark sexual assault and misconduct survey and informed attendees that Georgetown’s undergraduate participation rate in the survey was almost three times the average of other universities. Students leading on-campus efforts, including the sexual assault working group and the head of Georgetown’s student government, also shared updates on efforts to support cultural shifts on campus to make Georgetown a leader in gender equity.

Mlambo-Ngcuka spoke on the need worldwide to work closely with men to share the responsibility to end gender-based violence and discrimination. Through partnerships with impact champions like Georgetown, one of only two such universities in the United States, she believes #HeForShe’s grassroots campaigns to encourage positive masculinity and boost dialogues on equality can expand.

Mlambo-Ngcuka commented on new forms of insecurity and threats, like climate change and terrorism, that worsen vulnerabilities for women and girls. She celebrated Georgetown’s efforts to research these issues through the Institute for Women, Peace and Security and also encouraged Georgetown and other #HeForShe universities to consider new research initiatives that would capture the voices of survivors of conflict and non-Western perspectives to enhance understanding of women’s experiences and conflict-prevention.

Asked how Georgetown students could serve as role models to others and improve opportunities for women and girls today, she encouraged students to support other women, build networks to exchange knowledge, and support the advancement of younger professionals throughout their careers. 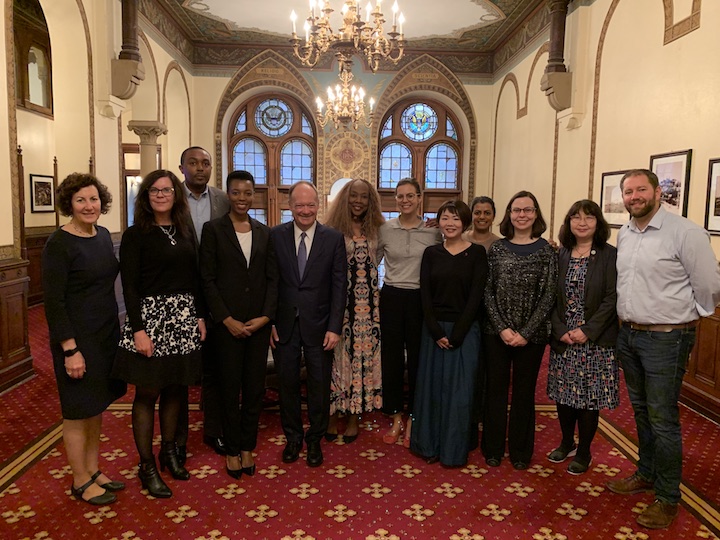 Representatives from the United Nations and university and corporate leaders discussed progress in gender equity at the most recent HeForShe Joint IMPACT Lab Session, hosted by Georgetown.